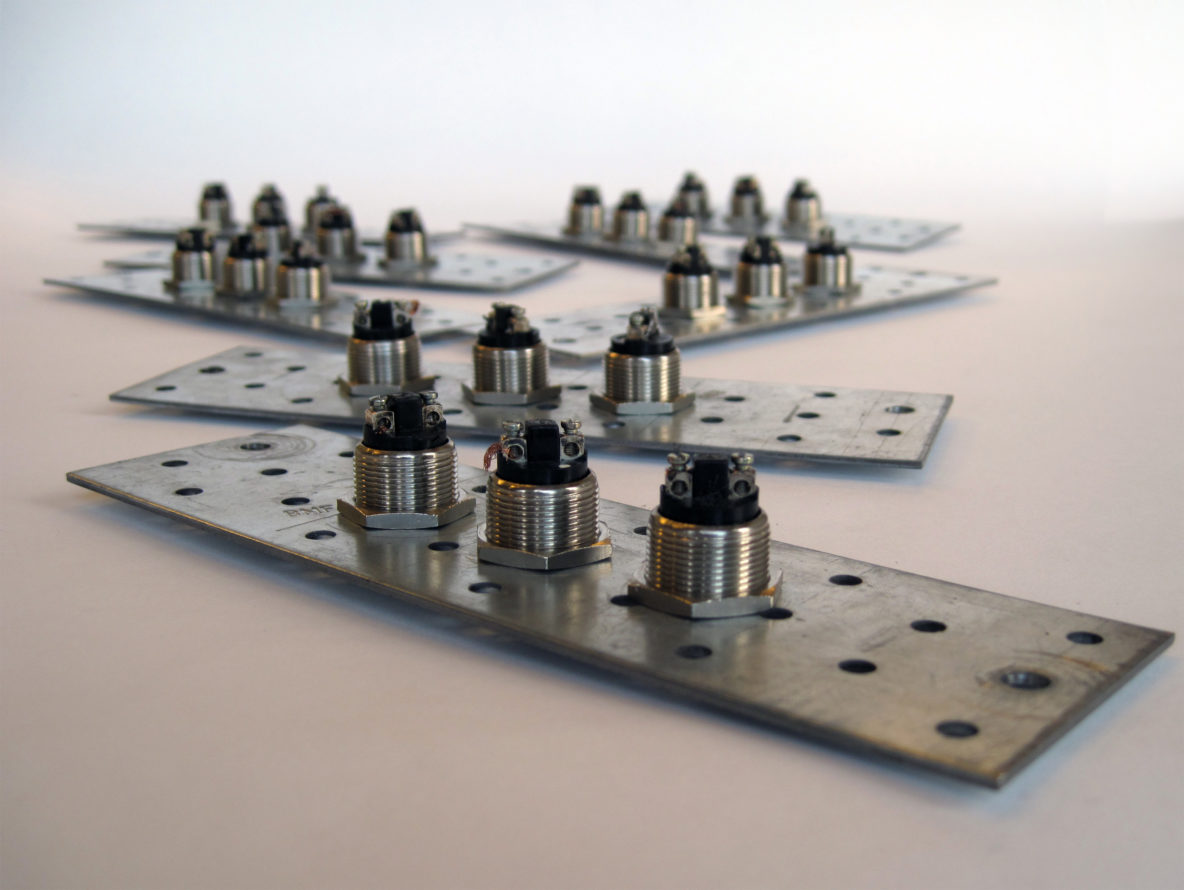 The starting point for this installation was the modern city’s tracks of distorted sound. The sound of the city carries its own energy and this energy is tracks from the people who forms the sound of the city, or who are themselves formed by it. We wanted to take the city’s own distorted sound sources into the installation, and at the same time examine the city’s acoustic characteristics. We projected the soundtracks over a sound-floor in perforated metal that made a re-composition of the city’s acoustic and spatial tracks possible.

In 2003, I bought some cheap loudspeakers for simple audio tests. These were loudspeakers of the worst sort, and the distorted and shrill sound seemingly did not sound suitable for much more than simple alert signals. Anyway, I gradually became fascinated by the loudspeakers own distinctive characteristics. The fierce and intense sound had something about it that could not be recreated with more sophisticated audio equipment.

At the same time, I worked as usual in my own studio in downtown Oslo. Every night I walked through downtown streets and heard the same distorted and intense sounds. From vegetable shops and kebab outlets, cars and taxis, distorted Kurdish pop music and the throbbing bass of Indian film music, this was the acoustic imprint of the Oslo city centre. Winter was coming as well; asphalt dust and shades of dirty gray snow was dragged around in the streets. Traces of people mixed with the dust and exhaust in continuously variable patterns.

It occurred to me that these three impressions were bound together. The fierce and intense sound was part of what constituted the city’s sound, and this sound left acoustic tracks in the urban space in the same way as the dust and the dirty snow. The tracks and the timbres might be worth examining in more detail in a sound installation.

I contacted NOTAM and the Ultima Festival, both of which were positive to the idea. Trond Lossius whom I had worked with the installations Erotogod and Lydriket was also in and soon we had a team.

The installation opened at the Ultima Festival in autumn 2004 in the premises of Norsk Form at the time. A centuries-old, dimly lit cellar crypt was covered by a metal floor. Based on the user’s interaction the sound from the floor changed rating from soft sonic sprinkle to intensely distorted and squeaking sirens. Remote imprints of screeching tires and throbbing bass rhythms were writhing in and out of new varieties, and you could hear traces of something that once might have been the sound of the city. The sound had a strong spatial character, where burning and squeaking timbres was thrown over the floor in continuous new formations.

A spatial acoustic field
So, the installation consisted of a 100 m2 floor of perforated metal. Under the floor there was a network of forty distorted loudspeakers that together constituted a spatial acoustic field. Sensors on the floor surface controlled the compositional combinations of the sounds. They controlled the different defects and errors that were written into a computer program. In this way, you could control the textural and structural evolution of these errors, while keeping the distorted character of the sound.

The city’s energy
The installation Soundtracks thus examined the city’s tracks of distorted sound. The city’s sound has undergone major changes leading up to the intense network of noise that it constitutes today. This intensity also carries an energy of its own. This energy is tracks from the people who forms the sound of the city, or who themselves are formed by this sound. We wanted to bring these energetic sound sources directly into the installation, in order to be able to go into the very nature and characteristics of the sound sources. The city’s acoustic character was not just timbral, it was also spatial. These spatial aspects were explored, making it possible to create specific acoustic tracks as the sound travelled across the installation’s floor.

The sound of the city
If one is looking for traces of the origins of the modern giant metropolis structures, one may find it in the transition from hunter-gatherer existence to the agricultural community. The new society gave centralization of power, great access to resources and protection, and with this came opportunities for the exchange of ideas and cultural expressions. If you look at these giant collections of human activity from above, they reminiscent of exotic deep-sea life forms as they twist their tentacles of electric lights, transportation structures and acoustic tracks in continuous movement throughout the landscape. The continuous movement of cranes points to the modern city’s main features, namely change, and this aspect of change is also central to the sound of the city.

The cities that once were characterized by the sound of horse cabs, livestock and shouts from the market was during the 20th century acoustically shaped by a new era; by machines, transportation systems and construction of buildings and new types of urban spaces. This new acoustic imprint of buildings, engines, sirens, alarms and electrical interference also makes it difficult for people and animals to orient themselves. The enormous quantities of sound make it hard for animals to communicate, and at worst lead to the extinction of species both above and under water. Nor has Man fully adapted to this new habitat, and thus reacts with stress, aggression, lack of sleep and anxiety.

But the sound of the metropolis has another side to it. It tells the story about the life of modern man, and it does so in a very intense way. Through popular beliefs and legends one learn about the lives of figures like Jesus, Satan, Buddha and Bigfoot by studying the footprints they made on mythological sites. By reading the fossil traces of life we can in the same way learn about the very lifestyle of prehistoric existences. In our time, large amounts of the tracks are digital, and the continuous registration of information from telephones, credit cards, the internet and other digital media writes the story of our lives down to the smallest detail. But we also makes tracks in the form of sound.

The sound of the city is filled with the sound of cell phones, mp3 players, car stereos and café loudspeakers. We form the sound of our own lives in the city, and thus form the sound of the city itself. This sound portrays life in the city with such a high energy level that it is as if the city itself draws this acoustic self-portrait. The sounds are continuously superimposed with each other. In the loneliness of the big city, we effectively filter out screams, verbal threats, screeching tires and sirens, and the identity of those who made the imprint are hidden. The acoustic tracks are wiped off and regarded as irrelevant and undesirable.

It was these relationships between the city, sound sources and tracks that we wanted to examine in the installation. We were not the first who had been fascinated by the noise of the industrialized city. Already in the early 1900’s the futurists created the work Risveglio di una Citta1. But where the futurists described the sound world of the new cities through specially designed noise instruments, we wanted to take the city’s own noisy sound sources directly into the installation.

So the sound of the city poured into the streets from crackling radios, stuttering CDs and roaring car stereos. It was the characteristics of these audio sources that we wanted to examine and use. We wanted to see what potential lay in these undervalued sound sources. It was not a goal for us to create hyper-realistic soundscapes, but rather examine the media’s own built-in aesthetic potential. The artistic result had to come as a result of an understanding of the tool, and not as an attempt to embellish the result with digital watercolours. The very media on which the work was mediated was digital sound, and ultimately the loudspeaker. The production technology was an inseparable part of the work and not a side effect that we would rather have got rid of.

To realize the idea, we constructed a sound floor in perforated metal, and under this floor there existed a network of forty loudspeakers with different distorted characters. Through this floor, we could not only examine the city’s distorted sound, but we could also examine the spatial qualities of these soundtracks. The acoustic tracks that we make in the urban space are not only timbral, but also spatial. In the same way as the cars dragged the dirty snow through the streets throughout winter, the sound of the city was also projected three-dimensionally in the urban space. Sirens with the Doppler effect that hurried past, the thumping from the car stereos that gradually changed its character on its way through the streets, and the ever-changing spatial timbre of people, cars, bikes and cafés. All this was an experience in constant motion. Similarly, the installation’s sound was spatial. The large number of sound points under the floor made it possible to construct very specific tracks and paths that the sound could follow in a kind of acoustic action painting in which the sound was emptied, dripped and thrown across the floor.

There was also another reason why we wanted to work with this low-tech solution. The gigantic sound installation Lydriket had shown that it was a difficult process to implement artistic concepts in large-scale productions. In Soundtracks, we had the opportunity to work within a more limited concept in which we had complete control over all stages of the production. As we still ended up with a 100 m2 large metal floor of several tonnes, and with a 40-channel loudspeaker system with custom written software, it is obvious that we still had not quite mastered the minimalist form. Anyway, we managed to capture the intense and distorted spatial sound of the city as it appeared to us in Oslo in the autumn 2004.

Soundtracks was exhibited at Norsk Form during the Ultima Festival 2004.

1 The futuristic noise piece Risveglio di una Citta (The Awakening of a City) by Luigi Russolo and Ugo Piatti was published in 1914 and demonstrated at the home of Filippo T. E. Marinetti. Among the audience was Igor Stravinsky.